The computer as seen by Chibo engineers 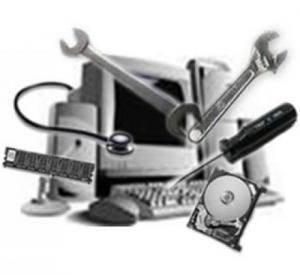 A PC consists of the assembly of electronic components, having various functions, metal structures and plastic material. Schematically, four main parts can be identified:

The Central Unit consists of printed circuit boards and plates consisting of a plastic substrate onto which integrated circuits, capacitors, resistors, and inductors are attached. All these elements are properly connected to each other by tracks of conductive alloy material deposited on the plate.

In the manufacture of printed circuit boards and plates, the main raw materials used are:

A printed circuit board, on the other hand, consists of:

In addition, there are also metals distributed as follows:

Integrated circuits consist of a matrix of semiconductor material, usually silicon, encapsulated in an enclosure that may be ceramic or plastic material and metal conductors for connection with other components. The plastic casing is the most common type for integrated circuits today, accounting for more than 90 percent of all integrated circuit casings.

The leadframe consists of silicon, with small concentrations of bromine, phosphorus, arsenic, and antimony, and is covered with a very small layer of aluminum, about 0.001 mm, sometimes also with plastic or ceramic to protect it.

There are several types of capacitors, characterized by different dielectric materials. The most commonly used capacitors are:

They consist of an alumina ceramic substrate on which a layer of conductive metal or glass-carbon mixture is deposited. The terminals are usually gold, palladium-silver, or materials having the same electrical properties.

These consist of a winding of copper wire around a ceramic or ferromagnetic core. The inductor can, then, be coated with epoxy resin. The ferromagnetic core may be made of iron sintered with organic binders, Fe-Ni or Fe- Zn alloy, and may contain Sm, Pr, Co or Nd.

Relays are used with peripheral control functions and are characterized by low current loss, low sensitivity to external disturbances and high reliability.

Solder is generally made from alloys consisting of 63% tin and 37% lead. For SMT (Surface Mount Technology) alloys of 2% silver, 36% lead, and 62% tin are commonly used. However, the total use of silver is modest as only 10% of electronic components use SMT solder. Other solder materials include antimony-tin, bismuth-tin, and indium-tin alloys. The most commonly used adhesives are usually compounds of epoxy or acrylic nature.

The casing of the data processing unit is made of metal with plastic parts (about 300 g).

A cathode ray tube essentially consists of four parts: the cone part, the screen, the connection between the cone and the screen, and the electronic part.

The glass used in the manufacture of cathode ray tubes can be of different types, but all contain metal oxides capable of absorbing rays (PbO, BaO, SrO). The fluorescent substances contained within the screen are usually sulfides or phosphides of zinc, europium, yttrium, and cadmium.

In older models the fluorescent coating contains mainly cadmium and zinc sulfides, while in newer models it is 94% zinc sulfide and rare earths.

There are different types of displays:

The monitor casing is made of ABS plastic or similar containing about 20% flame retardant (deca or octa-BDE) and has a weight of about 1.7 kg.

It consists mainly of printed circuit boards covering an area of about 200 cm2 and the plastic cover.

In conclusion, the main materials that make up a computer can basically be grouped as follows: